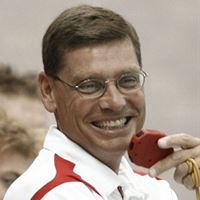 One of the most experienced and respected mentors in the world of competitive swimming.

Bill Wadley, as Ohio State's men's swimming coach, is one of the most experienced and respected mentors in the world of competitive swimming.

The 2010 Big Ten Conference Coach of the Year, Wadley's teams have posted eight consecutive Top 20 finishes at the NCAA championships; his teams have been ranked in the NCAA Top 25 for 22 of the past 25 seasons.

Wadley's Buckeyes get it done outside of the pool, too. Last season, for instance, the team had a remarkable run in the classroom with a 3.14 overall grade point average (GPA) and earned the distinction of being a Collegiate Swim Coaches Association of America Scholar-Athlete Team.

• Six Buckeyes were named to the Big Ten's Distinguished Scholars list with GPAs above 3.70;

• 33 student-athletes were honored as an OSU Scholar-Athlete; and

• 26 swimmers and divers who are at least a sophomore eligibility-wise were named to the Academic All-Big Ten Conference team.

In the spring of 2010, Wadley was named Technical Swimming Chairman for the International University Sports Federation (FISU). It is a position of utmost importance from an administrative and operational standpoint for the swimming competitions at the World University Games. Starting with the 2011 World University Games in Shenzhen, China, Wadley will be the swimming expert for the world, ensuring that the host country sets up and then runs a first-class swimming competition.

The position is appropriate for Wadley because making sure athletes receive a quality, first-rate experience is something he does every day as coach of the Buckeyes. That goal reached a pinnacle of realization as he coached Ohio State to a stunning and decisive win at the Big Ten championships for the school's first Big Ten crown in 54 years. He was named the 2010 Big Ten Conference Coach of the Year for his team's efforts.

Wadley, a past president of the American Swimming Coaches Association and who is now in his sixth term on the ASCA board, has coached 15 Olympians. Buckeye swimmers and divers have qualified for the NCAA championships in 23 of Wadley's 25 years as coach.

Wadley has compiled a dual-meet record of 223-40 at Ohio State and has a career record of 247-50 in 28 seasons as a college head coach. He has produced more than 35 world-ranked swimmers and 15 of his student-athletes have reached the Olympics. Two Buckeyes competed at the 2008 Olympic Games in Beijing, China - Itai Chammah and Niksa Roki - while George Markovic qualified for the 2012 Olympic Games in London.

Wadley has represented the United States as a coach on numerous occasions. He has coached the 1986 Olympic Festival and the 1988 and 1992 Gold Medal teams comprised of top non-collegiate swimmers in preparation for the Olympics. In 1991, Wadley coached the U.S. team at the World University Games and in 1993 he was coach of the U.S. National Team training camp. In 1998, he was chosen as the head men's coach for the Goodwill Games. The team went on to set seven Goodwill Game records. In 2009, Wadley was an assistant coach for USA Swimming for the World University Games in Bangkok, Thailand, and he served as an assistant for Team USA in the 2011 Duel in the Pool.

Outside the collegiate ranks, Wadley coached the only double gold medalist in both the 1987 and 1993 World University Games for the United States. He has coached swimmers to the Olympic level of competition for the past six Olympiads. Recent Ohio State swimmers have won a total of three gold, two silver and five bronze medals in international competition. Marko Strahija qualified for the 2000 Olympics in Sydney for his native country of Croatia, finishing ninth in the 200 backstroke. Most recently, Wadley showcased 28 current, former or incoming Ohio State men's swimmers compete at the 2012 U.S. Olympic Team Trials.

Wadley came to Ohio State after two years as the men's swimming coach at Michigan State. He also served as the MSU women's coach during his last season, guiding both teams to Top 20 NCAA finishes. This year marks Wadley's 27th as a coach in the Big Ten Conference. He started his coaching career at the University of Alabama under the tutelage of five time U.S. Olympic coach Don Gambril.

"The foundation of our program is technique and quality and we continually look for opportunities to help our athletes improve," Wadley said. "Challenging athletes to train and compete at the highest level is our primary goal."

During the off-season, Wadley is involved with swimming at all levels working and hosting camps and clinics around America and specifically in the Buckeye State. Wadley served as president of the American Swimming Coaches Association and is a six-time board member. He is also a Board Member of USA Swimming and frequently lectures at coaching clinics across the world.

Wadley was twice chosen to run the NCAA Yes Clinic and serves on the NCAA peer mentoring committee.

His teams are active in the community. In previous years, members of the squad helped train Jason Andrus for the Special Olympics. Andrus went on to win two gold medals at the 2003 World Special Olympics in Dublin Ireland. For their work with Andrus, the men's swimming team was named the 2002-03 "Outstanding Support Organization," a statewide award recognizing achievement and contribution to the Special Olympics.

Wadley is a 1979 graduate of Austin Peay State University. He did graduate work at the University of Alabama. He and his wife, Gail, an athletics trainer at the OSU Sports Medicine Center, reside in Columbus. Bill has two sons; Brian and Michael.

Assisted Under: Don Gambril, a five-time Olympic coach, at Alabama

Away from the Pool: Wadley conducts several swimming clinics and camps for the community. He enjoys playing golf and hiking.

Check back later for some content here. Thank you!