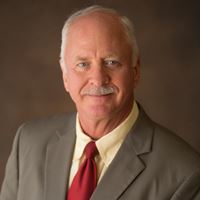 36 year career in club and high school coaching and administration.

George Block is currently serving as President of the World Swimming Coaches Association and Chair Emeritus of both San Antonio Sports and Voices for Children San Antonio.

From 2009-2012, Mr. Block was COO, then CEO of Haven for Hope, San Antonio’s transformational homeless center. Under Mr. Block’s leadership, Haven developed its In-House Recovery Program (IHMP), a self-contained recovery and rehab program for homeless men and women. Based on that model, he initiated the development of a Mental Health Dorm, where homeless patients could receive daylong, outpatient mental health treatment and support.

The bulk of Block’s career was spent in education and athletics, where he had a Hall of Fame career. As the Director of Aquatics and Assistant Director of Athletics for the Northside School District he developed the Northside Aquatic Center into an internationally recognized center for athlete development.

In his over three decades at Northside, Coach Block has developed 9 Olympians, 50 UIL State Gold Medallists, over 285 All-Americans, Olympic Trials qualifiers in 1984-88-92-96-2000 and 2008, and numerous National and Junior Champions. He has produced Olympians in three different sports (swimming, triathlon and pentathlon) and Olympic swimmers from four different countries (United States, Nicaragua, Egypt and Algeria).

In 1987, Coach Block was awarded the Phillips 66 Performance Award. In 1992, Coach Block was the Coca-Cola Texas Coach of Honor. In 1997, the United States Water Fitness Association named the Northside Aquatics Center the Top School District/Community Facility in the nation and Coach Block its Top Aquatics Director. In 1998, he received the NISCA Outstanding Service Award.

Coach Block is married to Margie, a retired nurse. They have three children, Meagan, a Family Law Attorney; Jeremy, a teacher and coach; and Jackson, a Ph.D. in Biomedical Engineering.

How much time, if any, should teenage swimmers spend warming up before a training session?

I think this answer comes in two parts.  Most coaches structure their training sessions to progressively prepare their swimmers for their "main sets,"i.e. the most intense sets that are the critical objectives for that practice.  Roughly, that gradual build-up would be 20-25% of that session's total volume.

Before that, when the athletes are standing on deck, dry and warm, their coach will ask them to "warm-up."  What is occuring there is moving the large amount of blood that is in our skin, through the internal organs, to the working muscles.  That takes about 8-10 minutes.  If the "teenager" is 18 or 19, probably 8-12 minutes would be appropriate.  If the teenager is 13-17, their attention spans and ability to warm-up independently are much shorter, so the coach will probably prescribe a 4-6 minute swim to "get the blood moving," then move into their series of preparatory swims leading to their main sets for the session.

I would agree with George. Generally if the session is early in the morning, the warmup should be more dynamic and active. Static stretches are less effective. Get them moving and "working" the different muscles groups to get that blood flowing well.

Good morning Mr George : I hope every thing is ok I want to ask if ASCA make swimming disability clinics and if yes what is the nearest one and where thank you so much

If you can give me your location, I can send you information about Disability Clinics.  Most are in the US, but we could also develop one for your area, if needed.

What sort of diet do you recommend for high school swimmers?

7/13/2017,
George Block  replied:
This may sound like a little bit of a cop-out, but a balanced diet is the key.  Depending on how much they train, that balance tips more and more toward carbohydrates.  If the athlete is doing 2-a-day workouts, they almost can't eat enough carbs.  If you think about the time it takes to run a marathon, the kids can easily be swimming 2 marathons per day!

If I were picturing a plate, I would think a quarter of the plate would be protein, a quarter vegetables and half carbs.  If you are a parent asking this, your plate should almost be the reverse of this, a quarter carbs, a quarter veggies and half protein.  You could also eat on a salad plate while your swimmer ate on a serving platter!

All the typical caveats apply.  Don't drink sodas with the meal.  The very best thing they can drink is water with some lemon or lime squeezed in to it.  Chocolate milk is better than sports drinks (and cheaper).
Reply