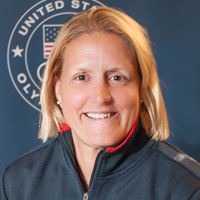 Julie O’Neill currently serves as the Managing Director of Paralympics for the United States Olympic Committee (USOC). In this position, O’Neill oversees the high performance planning and support processes and sport development projects for the 28 Summer & Winter Paralympic sports. She also directs the day-to-day operations for the “internal Paralympic NGBs”, the 5 Paralympic sports managed by the USOC – Athletics, Cycling, Swimming and Alpine & Nordic Skiing. She began her USOC career in 2003, when she joined U.S. Paralympics as an Associate Director and Head Coach of the U.S. Paralympics Swimming National Team.

Under her leadership, the 2008 U.S. Paralympic Swimming Team achieved unparalleled success as the team finished first in the medal standings for the first time, winning 17 gold medals at the Beijing Paralympic Games. With 44 total medals, nine more than they took home from Athens (2004), the team proved their ability on an elite international stage. The U.S. swimmers set a total of 16 world records, 23 Paralympic records, 48 Pan American records and 99 American records.

In 2006, O’Neill led the U.S. team that won the overall medal count at the IPC Swimming World Championships in Durban, South Africa. It was the first time the U.S. had won the medal count at an IPC World Championships or Paralympic Games in the sport of swimming. The U.S. performance led to O’Neill being selected as the 2006 U.S. Olympic Committee Paralympic Coach of the Year.

O’Neill has served as the Team USA Chef de Mission for the 2014 Sochi Paralympic Winter Games, 2015 Toronto Parapan American Games, and 2016 Rio Paralympic Summer Games. In 2015, she was honored by the International Swimming Hall of Fame with the Paragon Award for competitive swimming.

Check back later for some content here. Thank you!