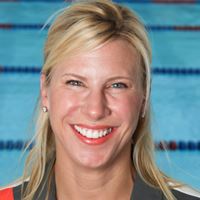 Kathleen Prindle has been a unique and inspirational coaching presence in South Florida since 2002.  A former competitive swimmer from Northeastern Pennsylvania and a 1993 graduate of Pennsylvania State University, she has nearly 40 years of aquatics experience as coach and athlete.  Kathleen is an ASCA Level 5 certified coach, the highest level attainable. She was inducted into the Pennsylvania Sports Hall of Fame in 2015, for her cereer coaching accomplishments.

After earning a B.S. degree in Psychology from Penn State, Prindle moved to New York City to begin a career in the corporate fashion industry.  During her nine-year tenure at Liz Claiborne, Inc., she served in multiple Senior Executive roles.  She drove significant revenue for the company and led first-time initiatives that opened multiple international markets (Latin America, Southeast Asia), as well as piloted Liz Claiborne’s telecommuting program, a new concept in 1999.

Though retired from swim competition and busy developing her boardroom experience, Prindle never strayed far from her sport, and began moonlighting on nights and weekends at local pools.  She started a Learn-to-Swim program for disadvantaged youth in Hoboken/Jersey City. This soon led to a 1994 partnership with Stevens Institute of Technology in New Jersey, where Prindle started a Masters team as well as an Age Group team, earned her first Head-Coach position for both, and took the Hoboken Hurricanes/Masters from the developmental stage to their inaugural competition year of 1998.  Since 1987, Prindle has created nine Learn-to-Swim programs through the American Red Cross, AAU, and ASCA’s Swim America, and taught hundreds of students.   She has taught and coached throughout Pennsylvania, New York, Northern Virginia, south Florida, and at Orlando’s Disneyworld!

Prindle returned fulltime to the pool deck in 2002, at the Grandview Preparatory School in Boca Raton.  Beyond campus, she was soon involved with club swimming, as she was recruited, trained, and mentored by six-time Olympic coaching legend Michael Lohberg, former Head Coach for the 1988 German Olympic Team.  Prindle herself has coached multiple local athletes to JO, Zone, Sectional, State, and Junior National titles, as well as 3 US Olympic Trials, 3 World Championships, and 2 Olympic Games.

In 2011 Prindle founded Performance Aquatics, an elite swim club for senior (13+over) athletes. “PAQ” trains in Deerfield Beach and on-campus at Grandview Prep. This boutique approach to swim training has proven to be very effective and her business model is being duplicated nationally. Kathleen works with swimming Olympians and Olympic hopefuls, post-grad domestic and international athletes, and serious high school swimmers: Many of her athletes have gone on to further their careers at the Collegiate, National, and International /World Championship levels.  She also works with professional athletes from other sports disciplines (triathletes, pentathletes, baseball players, and golfers) to finesse their stroke mechanics and teach them to use aquatics as a cross-training methodology.

In addition to her recent work in Club swimming, Prindle has been a guest lecturer at Lynn University (Boca Raton, FL) on Business Practices and a Consultant for various swim schools throughout Florida’s Gold Coast and Virginia.  She still lends her expertise to the Grandview Preparatory School in Boca Raton, FL, where she has served as Aquatics Administrator/Head Varsity Coach for 11 years. At Grandview, Prindle manages the on-site aquatic facility, and has been the Varsity Boys’ and Girls’ Head Coach since 2002.  She also developed Grandview’s Lower-School PE curriculum and instituted Middle School swimming as a funded sport.

The continual pursuit of coaching knowledge and professional excellence earned her an American Swim Coaches Association Fellowship in 2010. Prindle is a Board member of the Florida Gold Coast LSC, an elected member of the Florida State High School Athletic Association (FHSAA) Advisory Board, serves on USA Swimming’s Senior Development National Executive Committee (term 2012-2016).  Kathleen was elected Vice President to the Board of Directors for the American Swim Coaches Association (ASCA) in 2014.

Coach Prindle is driven by a desire to help each and every swimmer achieve their own athletic goals through a focus on technical perfection, a positive coaching style, and illumination of life lessons.  She sees tremendous value in interacting with her athletes with laughter and kindness, to create an environment where any success is possible.

She and her husband, Chris, reside near the beach in Boca Raton.

I'm Domenico, I am writing to ask you if it can give private lessons to my 8 year old daughter to improve flotation, style and technique.

Currently my daughter is part of a club that trains in the pool of Tamiami Pool in South Miami and has done many private lessons.

I am interested in private lessons with the coach in water with my daughter.

If it is available, I ask you to give me a reasonable price and sustainable for a package of private lessons of 1 hours each Monday to Saturday for the whole month of June to be held in the morning.

6/8/2017,
Kathleen Prindle  replied:
Hi Domenico,
thank you for your inquiry. I currently work with athletes who are 13+older, but I'd be happy to recommend some great coaches nearer to your location who might be able to help you. Feel free to give me a call 561-212-7175 if you need anything!