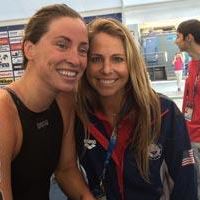 Catherine Vogt, a former top-flight distance swimmer who has coached at both the collegiate and national levels, is in her ninth year at USC and in her first season as the Trojans' associate head coach. A mainstay on Troy's men's and women's staff for almost a decade, she is also one of the top open water coaches in the country with Olympic and World Championship experience. She came to Troy after three years as an assistant coach at her alma mater, North Carolina (2005-2008).

Vogt helped guide USC's 2016 women's team to a memorable season that included its first ever Pac-12 title as well as a sixth-place finis at the NCAAs. Troy featured eight All-Americans in 2016 and closed the NCAAs with its first-ever NCAA title in the 400y free relay with Kasia Wilk, Kirsten Vose, Chelsea Chenault and Anika Apostalon. During its Pac-12 title run, Troy got scoring from all 27 members of the squad (21 swimmers, six divers) en route to a program-best 1481 points. USC's men's team finished 13th at the NCAAs and second at the Pac-12s. USC won seven conference titles, including two by Reed Malone in the 200y and 500y free.

Following the 2016 collegiate season, Vogt turned her attention nationally and served as the head coach for the U.S. Open Water team at the 2016 Olympics in Rio.

In 2015, she helped lead USC to a fourth-place NCAA finish on the men's side for the second time in three years as well as the men's team's first Pac-12 title since 1979 while the women's squad placed eighth at NCAAs. The women's team featured six All-American swimmers, including individual finalists Kendyl Stewart (100y fly) and Chenault (200y free). The USC men's team had eight All-Americans, paced by senior Cristian Quintero, who won his first NCAA crown in the 200y free while also leading Troy to relay victories in the 400y and 800y free relays. Both Quintero and Malone finished top 5 in the NCAA 500y free. Quintero, at the Pac-12 Championships, became the first man ever to sweep the 100y, 200y and 500y free at the same meet and again led USC to relay wins in the 400y and 800y free relays and the 400y medley relay. Troy had three conference finalists in the 500y free and two top 6 finishers in the 1650y free.

In 2014, USC continued its strong success. The women's team finished fifth at the NCAAs to become one of only three teams to post five straight top 7 finishes while the men's squad took eighth. Each team producing nine All-Americans. Quintero won his first NCAA title in the 500y free, took second in the 200y free, third in the 100y free and then led USC to a victory in the 800y free relay, its first title in the race since 2002. Luca Spinazzola (100y back) and Dimitri Colupaev (200y free) were also finalists. Quintero won two Pac-12 titles (200y and 500y free) and led USC to wins in the 400y and 800y free relays. Kasey Carlson led USC at the women's NCAAs with three top 6 finishes, including a second in the 50y free while Stina Gardell was a two-time finalist. Carlson won the 50y free at the Pac-12s and she and Gardell each posted three top 4 finishes while then-freshman Chenault had three top 7s.

Following the 2014 season, Vogt was head coach for the U.S. Open Water team at the 2014 Pan Pacific Games.

Vogt, in 2013, helped oversee a USC's men's team that took fourth at the ç, its best since 2001, and a seventh for the women, its fourth straight in the top 7. The teams combined for 21 All-Americans and included NCAA titles by Haley Anderson (500y and 1650y free) and Vladimir Morozov (50y and 100y free) as well as USC's first 400y free relay title since 1977. The squads combined for 12 conference titles, including a men's sweep of all three freestyle relays. The women's team finished second at the conference meet for the first time since 2002 with a school-record points total. Vogt also served as the American open water head coach at the 2013 World Championships in Barcelona, her second national open water head coaching stint. Not only did the American Anderson win the women's 5K, but former Trojan and Vogt pupil Ous Mellouli, representing Tunisia, won the men's 5K and claimed bronze in the 10K. Under Vogt, American Eva Fabian also won bronze in the 25K.

In 2012, the distance-savvy Vogt helped USC repeat its third-place NCAA women's finish and its seventh-place NCAA men's finish. The women's squad featured 12 All-Americans, including two-time NCAA champion Katinka Hosszu (400y IM, 200y fly), who barely missed a third title in the 200y IM (taking second). Haley Anderson, one of Vogt's top distance swimmers, won her first career NCAA title in the 500y free in addition to a third in the 1500y free. The Trojan women also won seven Pac-12 titles, including two by Anderson in the 500y and 1650y free. The men's team featured six All-Americans, including Cristian Quintero, who was second in the 500y free.

Vogt also coached at the 2012 London Olympics, serving as an assistant on the Tunisian swim staff, working with Mellouli.

Mellouli won gold in the Marathon 10K and bronze in the 1500m free while Anderson also won a medal, taking silver in the Marathon 10K (seconds out first). Anderson earned her spot at the Olympics with a first-place finish at the FINA Olympic Marathon Swim Qualifier in Setubal, Portugal.

In her third year with the Trojans in 2011, Vogt helped guide a combined 15 men's and women's swimmers to All-American honors, including Hosszu, who was a three-time NCAA champion. The women's team finished third at the NCAAs while the men were seventh. Vogt pupil Anderson had a big year, finishing third in the 1650y free and sixth in the 500y free at the NCAA Championships and winning Pac-10 titles in both events. Anderson also won gold in the 1500m free at the 2011 World University Games was fourth in the 10K at the U.S. Open Water Nationals.

Vogt, during her second year with the Trojans in 2010, helped send 11 women's swimmers to the NCAA Championships as USC placed seventh, its best finish since 2003. Also, the Trojans posted a combined seven top 4 individual finishes and had two All-American relays. The men's squad finished 11th at NCAAs with a 10-swimmer squad.

In 2009, Vogt helped direct Rebecca Soni to her fifth and sixth NCAA titles while Hosszu was a three-time individual finalist. The Women of Troy finished ninth overall at the NCAAs and had four All-Americans. The men's squad, meanwhile, sent six swimmers to the NCAAs.

Vogt also served as head coach for the 2009 U.S. Open Water World Championship team that competed in Rome in July. Under Vogt, the U.S. won one silver, one bronze, posted five top 10 finishes and finished fourth in team scoring among 36 nations.

Vogt joined the Trojan staff after a busy 2008 season. She served as assistant coach to the 2008 U.S. Open Water World Championship team that competed in Seville, Spain. She also coached swimmers to second- and third-place finishes at U.S. Nationals, which qualified them for two of the five available spots on the World Championship team. She then traveled to Beijing, China, as U.S. head coach for the Open Water test event.

At the 2008 NCAA Championships, she helped guide multiple Tarheel swimmers to All-American honors at the NCAA Championships in the distance and IM events. She led Whitney Sprague to a second-place finish in the 1650y free and coached her to conference and school records in the 500y, 1000y and 1650y free. Also under Vogt, Joe Kinderwater swam to a fifth-place finish in the 1650y free at the NCAAs, setting two school records in the 1000y and 1650y free.

In 2007, Vogt's UNC women's distance swimmers finished 1-2-3 in the 1650y free at the ACC Championships, while the men placed 2-3. At the 2007 NCAA Championships, Vogt helped guide Tar Heels Whitney Sprague and Chip Peterson to All-American honors.

Vogt's resume boasts several national-level coaching stints prior to 2008 that include serving as head coach at both the 2006 Pan Pacific Open Water Championships and the 2007 Pan American Games, as well as serving as assistant men's coach at the 2007 Pan Am Games. Her position on the 2007 Pan Am Games men's staff marked the first time a female coach was named to a U.S. men's team staff at an international competition. She also was an assistant coach at the USA Swimming National Select Open Water camp in 2006 and 2007, as well as at the 2005 and 2006 Open Water World Championships.

While coaching the U.S. team at the 2006 Pan American Open Water Championships, she guided the men and women to wins in the 5K and 10K, as the U.S. earned the overall team award as well.

Vogt swam for North Carolina for four years in the distance freestyle (competing as Catherine Frock) and helped lead UNC to an ACC Championship during her freshman year. Her top ACC individual finish was a fifth place in the 1650y freestyle in 1996. She graduated from UNC in 2000 with degrees in education and psychology. She was named to the ACC Academic Honor Roll and Dean's List at UNC from 1997-99.

Vogt has one daughter, Carson Elizabeth, born in October of 2010.

As a Level 1 ASCA swim coach and USA swim coach and a mother of 2 Age group swimmers age 12 and 13 I would love your advice about what you think should be the commitment of these swimmers. Example, do you expect them not to take vacations during the swim calendar year with their...

I want to understand balance for kids and sport and trying to be a competitive swimmer at what age do you need to give up family vacations or fully committ to not doing anything else. Thank you.
1 comment | Share

5/4/2017,
Catherine Vogt  replied:
Hi! I am in the same place  a little bit with my 6 year old daughter! The team she is on requires participation at a champs meet this summer..but i (as a swim coach!) only have my vacation during the same time - so i am going to tell the team she won't participate, and hope they are ok with that!  As a working mom its hard enough to balance everything, and i dont know if there is real balance - esp in a job like coaching where its NOT 9-5...its a lifestyle!  Anyway, i do think you have to priortize family first - when it comes to vacations.  if there is a practice requirement for age group then its good to teach the kids they have to make that work and allow them to decide if skipping practice for a birthday party is the right call, or save a missed practice for extracurricular activity, etc.
I don't think you every have to give up family vacations, but also understanding that performance may suffer for repeated missed workouts too.  Does that make sense? Thank you!
Reply